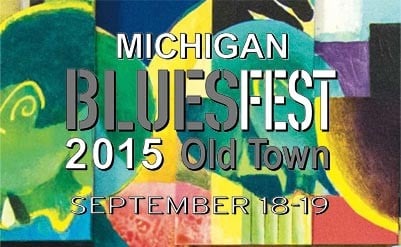 Michigan BluesFest 2015 (previously known as the Old Town BluesFest) is a free, two-day music festival drawing national, regional, and local blues talent – not to mention around 7,000 blues fans – to Lansing, MI on September 18th and 19th, 2015. Where will you be?

The 2015 Michigan BluesFest will take place in the streets of Lansing’s Old Town district, with festival vendors offering a great variety of delicious food and drink, clothing and crafts, jewelry and more. Capital City’s Old Town is known for both its grand architecture and the many galleries and unique boutiques that populate its retail spaces, most of which will be open and offering their singular wares during festival hours.

Primarily, however, Michigan BluesFest is about the music. Live music, and musical history in the making for each performing artist is asked to play something new: an original composition, improvisation, or something they’ve simply never played before an audience. This single detail is what makes Michigan BluesFest so original and compelling a celebration: it’s not just live music, it’s living music!

September 18 &qmp 19, 2015
Old Town Lansing – Turner Street and Grand River Avenue
Be sure to visit www.oldtownbluesfest.com for updated schedules, a list of vendors, and more.