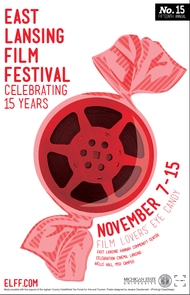 Opening Night Film: Searching for Sugar Man Wednesday, Nov. 7th, 7:30 p.m. at the Hannah Community Center.
From the East Lansing Film Festival website: “A talented musician from Detroit, who goes simply by the name Rodriguez, cuts a couple of records in the early ‘70s. They flop; what’s new? This is new: They become wild successes in, of all places, South Africa, utterly unbeknownst to the artist, who has disappeared without a trace and is presumed dead. The South Africans believe romantic myths of his demise. But undaunted filmmaker Malik Bendjelloul, seeking the truth about his death, finds more than he bargained for when he uncovers the reclusive artist living modestly, completely unaware of his superstar status hundreds of miles away.”

From the East Lansing Film Festival website: “Conceived by MSU grads, Marty Shea and Ian Bonner, this CollabFeature is an incredible achievement in artistic collaboration bringing 25 filmmakers from around the world to make a feature film. Each one contributed to the creation of the story, linking each director’s own segment into a cohesive, entertaining film that follows the adventures of an old backpack as it travels around the world from one owner to another. Who is the original owner? Join in on the journey, meeting colorful people and cultures along the way.”