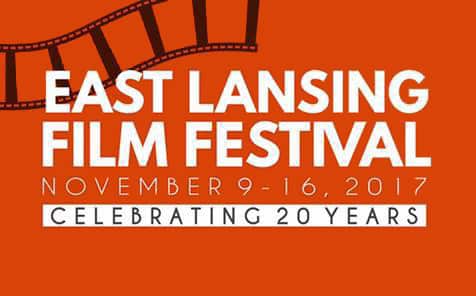 Film buffs – you do not want to miss East Lansing Film Festival 2017! This year marks the 20th anniversary of the annual event and a host of special retrospective and celebratory events are planned. November 9th through the 16th, 2017.

Michigan’s largest and most diverse film event, the East Lansing Film Festival, turns twenty this year and the anniversary promises a very special festival, indeed. Much of the details are still under wraps as the planning continues but attendees are in for a real treat this year.

East Lansing Film Festival 2017 is a world-class celebration of the silver screen. The annual event brings a week of independent films to Lansing every year. Over 100 films are screened during the festival’s 9 days. Feature-length, short subject, and documentary films alike are included, many of them making their screen debut right here.

The diverse array of films shown at the festival draw an equally diverse crowd. Fans and industry insiders alike flock to the festival. Each year see’s its own set of high profile guests and attendees. Past festivals have welcomed such famous luminaries as Oliver Stone, Michael Moore, and Bruce Campbell.

The East Lansing Film Festival 2017 combines the East Lansing Film Society Film Series, the 48/5 Film Contest, and the Lake Michigan Film Competition. This year will also see a series of special events commemorating the first 20 years of the festival. The festival remains one of the best ways to see thought-provoking, independent films, and meet people in the industry.

November 9 – 16, 2017
East Lansing Film Festival 2017 is online at elff.com. Keep up with updates to this year’s schedule by visiting the site of the festival’s Facebook page.

East Lansing Film Festival Lodging
Top off your week of films in Lansing with stylish accommodations at the English Inn Restaurant & Pub! Our Lansing area B&B is located along the banks of the Grand River on the historic Medovue Estate. Come explore our lush gardens and historic country estate before settling into your plush accommodations at the inn. Best of all, we’re also an English pub and restaurant, so you wont have to travel far for some of the best food in the area! Plus we’re just an easy half hour’s drive from Lansing, MI. Why settle for less? Stay at the best: The English Inn Restaurant & Pub.